1993 was designated by the European Parliament as the Year of the Elderly and of Solidarity between Generations. This led to West Lothian community education workers Jim Dixon (now the Network’s Vice Convener) and Annette Lambourne being asked to set up a local project with a European dimension and MEP David Martin suggested a visit by a group of people aged over 50 to the European Parliament in Strasbourg.

The whole experience proved so successful that the 33 West Lothian representatives decided to stay in touch and the following year, in 1994, they formed a network for older people’s organisations. Under Jim Dixon’s guidance the network became a registered charity with the aims of advancing education through the development of 50+ groups by encouraging social, educational and recreational activities.

Over time members acquired funds from various sources to allow the group to grow, including funding from the National Lottery and Big Lottery. Since then they have enjoyed holidays to places as far-flung as Jerusalem, China and Trinidad and Tobago (and places closer to home like Braemar and Oban), along with trips to the Robert Burns Museum, Dumfries House, The Kelpies and the Edinburgh Tattoo.

To mark the 20th anniversary in 2014, long-standing committee member Mary Ferrie wrote a book detailing the history of the network and a special information day/craft fair was held in the Regal Theatre in Bathgate. A celebratory dinner was also held with 129 people, including members and special guests, at the Legion Scotland. It was attended by Jim Dixon and original members Bill Burrows and Betty Henderson cut the cake. Guests were entertained by William Strachan, a tenor who has sung with the D’Oyly Carte and Scottish Opera and has appeared in West End musicals. He was accompanied by David Mackie, who has also appeared with the D’Oyly Carte Opera company, and members of the 50+ choir, The Network Singers.

The organisation now has around 400 members and over 35 special interest groups, who enjoy a wide and varied range of activities including walking, singing, bowling, quilting, genealogy, French, theatre, mahjong, cycling, bridge and pilates.

"We used to meet, month about, in the Community Centres of West Lothian, then, on the suggestion of Robbie Robertson, we moved to the new St. Mary’s hall. We had no office until we applied for a lottery grant and established ourselves upstairs in the Regal Cinema. This wasn’t ideal as there were a lot of stairs. We then moved to an office above the Citizen’s Advice Office in Hopetoun Street, but that was short-lived, after which we set up office in the museum for a year. Due to museum committee concerns about subletting we were on the move again, this time to our current premises in Linbar House. Once established there, we applied for another lottery grant and were set up with a secretary and an administrative officer. Such luxury, but it only lasted for three years. However, it did allow us to save our own money and thus we have a very stable financial footing.”
Mary Ferrie
"After retirement I felt the need to do something positive with my time and began to look for opportunities to volunteer. In 1994 someone told me about the trip to Strasbourg and so I became involved. After the trip a committee was formed and I was nominated from the start. I was a member of that same committee for over 20 years and have thoroughly enjoyed the opportunities the 50+ Network has given me and, most of all, that I have made friends over the years.”
Christine Hailstones 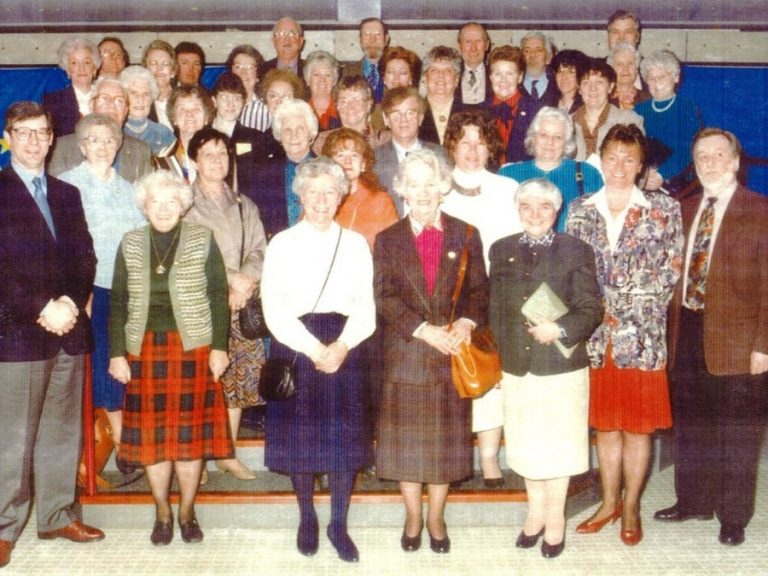